#79709  by Neddy
Wed Aug 20, 2014 8:08 pm
I was curious to find out for myself just how well such a cheap Tablet functioned as a GPS. I was going to post a small article on my findings but this is promising to become something of a saga so I thought that a serialised version might be better.

The software. The tablet came pre-loaded with iGo software and iGo NZ maps. The iGo website states "Please be aware that you cannot purchase and download the iGO My way application for Android... This navigation solution for Android is available to our business clients only."
I can only assume that all these Chinese GPS's must be loaded with pirated software.

The arrival. The Tablet was very well packed and seemed to be well made. I charged the battery up a bit and turned the unit on.
It was very slow to boot, but eventually found some satellites and got an accurate fix. It works!

No problem. This software is available all over the net. Free. My plan was to download these to my laptop and then transfer them to the Tablet GPS. There are literally hundreds of sites where iGo software and maps can be downloaded but because of the large size of the files most sites utilise BitTorrent. First I had to acquire BitTorrent software which loaded without any apparent problems. Then I had to select a site to download the iGo Maps and software. I don't really know what went wrong, but the download failed. Then I noticed that my Laptop browser Homepage had been changed, Google was gone and and I had acquired a new unfamiliar browser. Red alert! My computer had been hijacked by something called iStartSurf. I did all the usual delete things, but whatever I did I was unable to get rid of it. It just kept comimg back. A search of the net (via the Tablet) had many articles on how to get rid of this malware, but none of them worked. A reputable PC publication recommended a program called SpyHunter 4 as being able to remove iStartSurf so I downloaded that and ran it. This claimed to find 284(!) "objects of concern" on my brand-new laptop and for an appropriate fee it offered to remove them for me. I did another (belated) search of the net to find that many people had grave concerns over this program and it was under a lot of suspicion. I decided to reject their kind offer and tried to remove their program from my Laptop. I couldn't! Nothing worked, whatever I did the thing had me by the throat and I was totally unable to get rid of it. Now, there are programs advertised on the net as being able to get rid of SpyHunter but I was beginning to detect a pattern here and felt the whole thing was spiralling out of control. It was time to bail out. Fortunately I had set up Win8 backup and had a Backup point less than a week old that I could use to restore my entire system to what it was before this nightmare began. It took quite a long time, but I finally got the on-screen message that my system had been restored to the last backup point and was ready to be re-started. This I did. The computer started to boot normally then froze completely with a blank screen. The blue screen of death! By now I was sweating bullets but, long story short, I was eventually able to get into the computer far enough to reverse the backup and restore the current system. An infected computer would be better than no computer at all.
But.... a miracle! All the malware had now disappeared without trace! My computer was back to normal!

At this point I was understandably unwilling to try the same stunt again, so I scratched around and found a Chinese pirate that sells iGo software and maps on SD cards for $32. I am now waiting for this to arrive. At least it should be malware free - right?

#79710  by muzzanic
Wed Aug 20, 2014 8:19 pm
sounds like a lot of work Neddy getting your pc back to 'normal'.
I'm watching this with interest because of course we are also thinking this tablet might be a viable larger screen GPS option. While our little Garmin is great, Murray is finding that its increasingly difficult to make out, just another sign that life is marching on in years

I can probably help if you get hopelessly stuck.

I have yet to be inflicted with any virus, trojan etc. despite visiting hundreds (millions?) of dubious websites over the last twenty plus years. 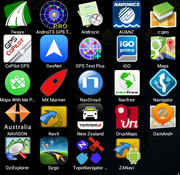 #79716  by idex
Wed Aug 20, 2014 10:24 pm
My sincere sympathy Neddy. I was about to try something similar myself but now think I should give that a miss.
Might try a couple of the free navigation apps instead and see how they go.
Bruce & Jan

Before I brought my Garmin I used Goggle Maps on my Nexus 10. The navigation was fairly basic, but it worked fine. If you do a bit of route planning on Google Maps before you leave on your trip and select your destinations they will come through on your tablet.

What was cool was being able to use Satellite and Street View while driving.

#79723  by Alias
Thu Aug 21, 2014 8:16 am
We have been using Sygic on an iPad for the last year or so.
Works well and accepts the NZMCA files.
Not free, can't recall the price but wasn't a lot.
Seems to update itself regularly automatically as have never been
asked to accept updates but an extension to
our street appeared magically just the other day.

#79724  by chip'n
Thu Aug 21, 2014 8:38 am
I have sygic as well on both my tablet & mobile, works really well, does not require an internet connection so uses no data, have to admit I have not downloaded the nzmca files yet, might have to work out how to do that. We also have 3 x 7" cheapo gps units in the bus & have one in my ute & one spare. The reason for the spare is I think I tried to download the nzmca files once & stuffed it up so ended up removing the data but managed to reload it from the sd card of one of the other units, hence a spare one was purchased, once again need to work out how to download the nzmca files to the one in the bus.
Dale
NZMCA# 31999