I use blueberries, strawberries & stone fruit (stones removed) apricots, cherries, plums, nectarines (slight tart best) greengages too
The fruit wants to be slightly under ripe, so they are still firm to the touch
Ripe or over ripe fruit, becomes mushy when the rumpot is ready to use 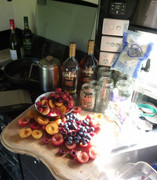 Sterilize your jars
Fill them up with fruit to the top, tip out, then weigh the fruit. Half of that weight is the correct measurement for the added sugar
eg: 200g fruit = 100g sugar (I go less 10% of the sugar weight) = 90g
Place a third of the fruit back in the jar, add sugar, rest of fruit, top up with rum, cap on....done 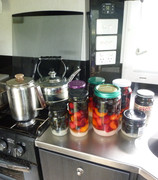 Some say, rumpot is ready in 6 - 8weeks time. Weekly, turn the jars over so the sugar mixes well
Personally, I let the rumpot mature for 3 months or longer, longer the better. Just leave them in a dark drawer in the camper till ready to use
This German / Danish dessert (Rumtopf, Rum Pot) is best served after a dinner with a nice Kapiti vanilla bean ice cream followed by a shot of the syrup rum

Our brew was about 1.2kg each of berries & stone fruit, 1.6L rum & just under a kg sugar
Once done & matured over time, the syrup rum shot is not a sickly sweet liquor, it is a rather smooth shot, similar to a properly made sloe gin

If using 1.25L preserving jars for your rumpot, once opened & if all is not used after the first serving, it is best to seal the leftovers in a smaller jar that fills to the top of the lid... to prevent oxidation of the fruit

Heather did cherries in a brandy/vodka mix with added sugar. We tried them at about the 9 weeks maturity... was bloody rough. We left this brew to mature for a few more months, came out really nice